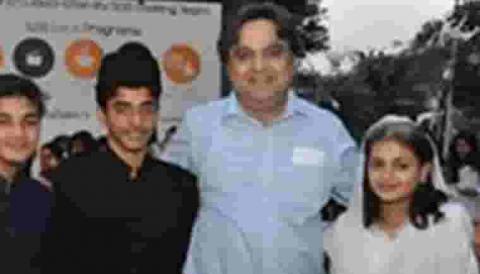 My initial education was from Aitchison College, making me a part of the privileged class in this country. Growing up, I could have been considered arrogant and to some extent selfish but life has a way of teaching us the best lessons so through twists and turn of fate, I was able to develop, change and improve who I was.

I am happy to say that throughout all the changes which occurred in my personality, my need to help others became stronger. As it turned into passion, I tried to launch an organization called PANI (Pakistan Association to Negate Illiteracy) in late 90’s, but as luck would have it, the organization remained a story on paper.

In the early 2000s, I discovered another passion I had, cooking. I learnt the art of cooking by watching BBC Food day and night, picking tips and tricks from maestros like Jamie Oliver, Nigella Lawson and more.

This is what made me start Makhdoom’s Kitchen, a Facebook group for friends who would like to have joint cooking sessions. I began calling myself a Cooking Foodie!

Due to health reasons, I was prompted to eat healthy and as I learned more about this, I decided to share this knowledge with my group members as well, hoping it’ll help them follow a healthy lifestyle.

Makhdoom’s Kitchen became involved with SOS Children’s Village when one day my wife returned home with a message, “The children want to eat fish.”

I wanted to realize their wish and took to my group to find suggestions and support. In the end, everyone came through and we were able to serve cooked fish to the children and from here on, my journey for the welfare of these children began and I formed Makhdoom’s Kitchen for Children.

Healthy Eating being the main objective of Makhdoom’s Kitchen, the program was designed to revolve around how to cultivate healthy eating habits in children. In order to help them achieve something in life, I began other beneficial programs as well.

The first program launched for 13 SOS Children’s Villages of Pakistan, was SOS Cookware care program. This was my pioneer effort towards children’s health and was initiated with the primary object of upgrading all the kitchens of SOS children’s villages for healthy and efficient cooking.

The second endeavor was the SOS Cooking Team. It was formed to educate and teach children the art of cooking and event management, followed by the launch of our third project- SOS Gardening program. The idea was to enable children in different fields of gardening, including but not limited, to Kitchen Gardening and Landscaping.

Despite all of this, I felt that more needed to be done for these wonderful kids and hence, SOS Marriage Fund was setup.

I wanted these kids to be successful and productive citizens of our community. Keeping that in mind, SOS Career Coaching was initiated as a ‘Learn to Earn’ training program. While all these programs were running successfully, the much needed Walled city program, was launched to empower children living in and around Taxali Gate Lahore.

The journey to help children in need has just begun, with many more ideas still in the incubator. With the grace of God and support from my circle, I am sure many more steps will be taken for the betterment of children in many more areas. – Makhdoom Sheikh, Founder at Makhdoom’s Kitchen for Children.