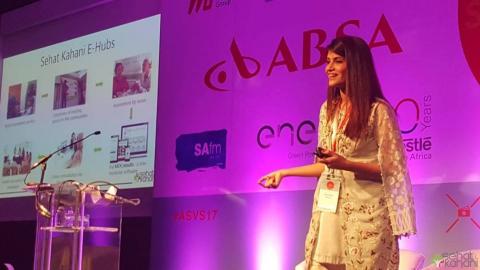 “Pakistan is a country of 208 million people. Half the people here cannot access basic health care, disproportionately and significantly affecting women and children, causing one in every five children die before their fifth birthday.
Of 1,000 children born in Pakistan’s poorest population quintile, 94 will die within 12 months
and 120 within five years.
In the midst of this fragmented and negligible health care system, Pakistan conserves a health force of 170,000 doctors, majority(more than 60%) of those are female doctors.
Already few in number, majority of the male doctors migrate out of the country, making Pakistan the 3rd largest source of foreign doctors in America. Female doctors, due to the social and cultural barriers that exist primarily in our society, often leave the workforce to become “doctor brides”.
This leads to two ultimate market failures in an emerging economy like Pakistan, access to quality healthcare and shortage and economic deficit of female workforce.
They fall in the hands of various socio- cultural barriers which make it very prestigious for women in Pakistan to obtain a medical degree but forbids them to work after marriages and if they are given the freedom to practice, they are offered little support in terms of home management.
My story resonates with these female doctors - I graduated from one of the finest medical universities in Pakistan, youngest of 3 children and belonging to a traditional middle class family where girls were wed by the age of 23, I was no exception.
Soon after, I conceived my daughter and broke the news to my institution, I was quietly but firmly asked to quit as they did not have any policy to allow female doctors to continue practicing, after having children, in the field of radiology.
It was then that I felt the pain of a woman who gives 23 years of her life living a dream; a dream to provide service to those in need, spending the key years of her life giving exams and practicing in hospital wards, only to having to choose between her career and family.
It was in one of those moments of extreme clarity, when I realized that my purpose in life was to find a path to serve the marginalized and such doctors in a way that not only empowered me as a female but also millions of females out there who needed a helping hand to guide and allow them to fully avail what is a basic right.
Thus, the journey of Sehat Kahani started. Sehat Kahani is a tele-health platform that connects, at home-out of work force, female doctors to underserved patients in low and middle income markets providing access to quality health care.
By using trusted intermediaries in the communities and dormant health infrastructure, we create Sehat Kahani E- Health Hubs where a front line worker is trained via a 5 step training on medical knowledge, leadership and soft skills to connects patients in these Hubs to qualified home based female physicians and skills specialists using video consultation and Electronic Medical Records systems.
We have designed digital health solutions to reduce the disease load of tertiary care hospitals by treating primary and secondary diseases via virtual home base female doctors part of Sehat Kahani network in less than 3 clicks.
Sehat Kahani, currently constitutes of a network of 14 E- Health Hubs across Pakistan (Sindh, Punjab ,KPK and Karachi) which has served to more than 500,000 patients directly and indirectly through its clinical and preventive digital health care services.
Invest in people and relationships- as when all fails, these are people who make you rise again.” – Sara Saeed Khurrum, Founder at Sehat Kahani