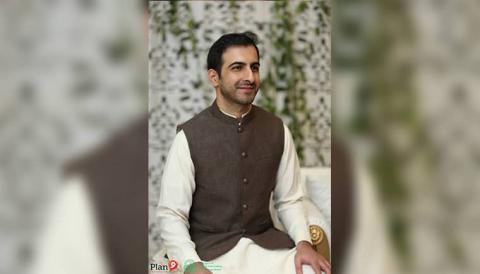 “My childhood was largely spent either in Lahore on the planes of Punjab or alongside the sheep marked rolling green hills of the Welsh countryside in the UK. At the time, my dream was to become a professional football player.

Despite the passion for football and sports in general, I developed medical complications curtailing that dream. Despite my limited abilities, I was still a fixture on the Aitchison College football team and later went on to cover Canadian Football (or soccer as it is called) for Goal.com that gave me the opportunity to meet the Galacticos of Real Madrid and to rub shoulders with none other than Cristiano Ronaldo. In short, despite the trials and tribulations that came my way, I still managed to fulfill an improbable part of the dream.

I have kept this attitude – utilising limitations, as a motivational factor to fulfil lofty ambitions.
Getting admitted to LUMS is a source of much pride in most Pakistani circles. Soon I became disenchanted with the quality of education and campus. Don’t get me wrong, it’s a beautiful campus, but having lived on campus for a number of years due to my father’s involvement with the institute and the sharp contrast to life at Aitchison had me pining for pastures anew. I got accepted at University of Toronto and the next 5 years sped by. One day I found myself saying farewell to North America to get back to Pakistan where I would complete my first novel. Little did I know that this would be my first sojourn into the world of entrepreneurship.

Whenever you set out to change the world, you can expect opposition and reaction. The closed mindset many people have is the first hurdle ‘Pakistan mai aisai nahi ho sakta’ (This is Pakistan man, no scene!).

Instead of letting such remarks tear me down, it strengthened my resolve.

The mental aspect of facing struggles, when you are mindful and focused, is something extremely powerful. When it comes down to it, shunning negative thoughts and concentrating solely on the positive helps both in physical wellbeing and mental peace. I have a rare auto immune condition that was diagnosed almost two decades ago.

There have been times I haven’t been able to stand up, let alone walk, but defying probabilities and naysayers gives a certain pleasure that I simply refuse to forego. So I’ve faced my struggles the only way I know how – with hope and a positive outlook.

I have a firm belief that,

“One can only control one’s own actions and internal make up. When encountered with personal issues, whilst it is important to analyse the context and the parties involves, but what is paramount is introspection. This simply allows an individual to evolve constantly. We don’t always evolve in a positive way, so weeding out deficiencies is part of a lifelong process of self-improvement.”

I’ve also been extremely lucky to have amazingly supportive parents who have always advised me on what they think is right but allowed me to pursue my dreams even if they did not coincide with theirs. Theirs is a role that cannot be replicated and without their blessings, understanding and freedom, I would not have been inclined to make a positive contribution to society.

One of my University mates left Canada for Pakistan in order to set up his own startup and whilst I was the least bit interested at the time, ideas began to take route in my head. The entrepreneurial spirit was strong in me, even as I struggled with various aspects of it.

Within a few months of returning to Pakistan, I had sold my iphone to procure the materials I needed to start a fresh milk delivery business. I would drive up Bedian road to the farm, collect the milk, seal it in clean glass bottles before delivering it to houses all over DHA. I never made a loss but having made a glaring hiring mistake, I decided to call it quits.

However, this was not to be my only flirtation with entrepreneurship.

Ticket Kataao started as a ticketing service for cinemas, buses, trains and more. I was surprised there wasn’t a Ticket Master or similar company operating in Pakistan. I had no idea about incubators and got an app prepared with the masses in mind before approaching Cinemas for their thoughts.

Having poured time, money and resources on the project it was obvious that the industry needed a lot more stabilising before Ticketing Platforms could make a serious impact in the country. Around the same time the idea for an Uber for Rickshaws reared its head and I decided to work on it whole heartedly – moonlighting after my day job as head of Monitoring & Reporting for a USDA project.

I was lucky enough to find a cofounder and together we set about developing this product, only to realise a certain Plan 9 had at the time recently graduated Travly and LUMS Center for Entrepreneurship had announced a Shahi Sawari in the papers. Both were at very initial stages whilst we were streets ahead of them and despite what appeared to be a good business model, our numbers suggested we should pivot.

It was around this time we underwent a seismic change in perception.

Every Rickshaw and Car we would see, would look like money that was going unclaimed. It made no sense and we have been working ever since to ensure that our business model benefits everyone – the client, the stakeholders as well as ourselves. We have had many doubters along the way and have managed to convert a few including some that are now working with us.

We finally decided not to risk Plan9 incubation spot to a competitor this time around and we’re honoured to be incubated at the most influential incubator in Pakistan.

“Sometimes in life you have to be willing to manipulate yourself to get the outcome you want. No matter what others say, if you think you can do it, just go out there and show them what you are made of. Many a times in life you view yourself differently than what others see on the outside. It is extremely important to balance your inner and outer halves to achieve an optimal level of peace within.”