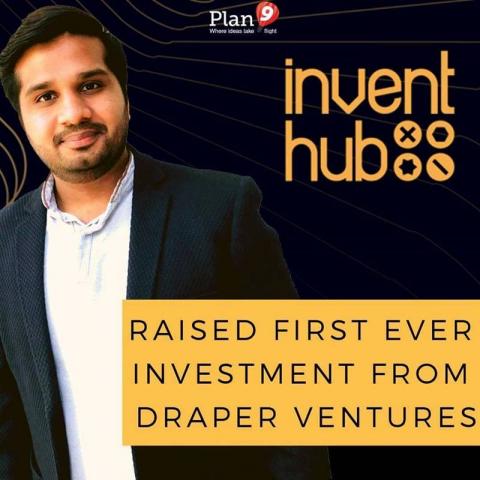 Usama Abid, Plan9 Alumni and founder of DIY Geeks (Cycle 8) has raised a huge investment for his startup InventHub. InventHub is an AI-based collaborative tool and a resource platform for hardware design and development that aims to change the way hardware is built. It took him 8 months of hard work and an idea that he believed in to mark his territory in the US market.

InventHub is a continuation of the philosophy of DIY Geeks to keep at the pace at which the world is evolving. They learned a lot about how to run a startup from their experience on working on DIY Geeks (Alumni Startup of Plan9) from the failures they came through, the challenges they faced to financial management.

Usama's startup InventHub got selected for the Global Accelerator Program (GAP) (run by NUST’s The Incubation Center) where they went straight to Silicon Valley for 3 months where they refined their product based on feedback from mentors and other entrepreneurs, started building a community of early adopters and are now on the verge of securing a seed round as well as their first major corporate client in the US.

“Hardware design is a messy process. Research shows that most inventors and innovators spend at least 50% of their time — depending upon their experience level — figuring out the resources and redoing the basics. One of our biggest goals is to cut down on the hardware design time. InventHub will serve as a central repository for all things hardware. As the go-to place, hardware developers can save time in the design phase to reach the commercialization phase faster, essentially changing how hardware is built today.” - Usama Abid 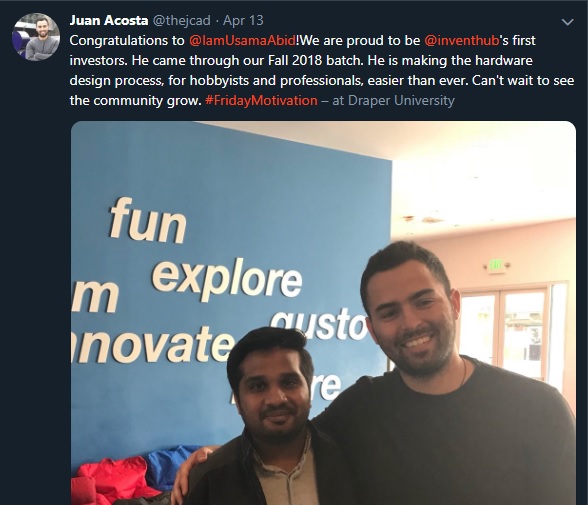 Usama has worked closely with Timothy Draper, who is the founding partner of a leading venture capital firm, Draper Associates. Tim was ranked 52 on the list of the 100 most influential Harvard Alumni, and 7 on the Forbes Midas list in 2006. Tim was named Always-On #1 top venture capital deal maker.

Congratulations to @IamUsamaAbid! We are proud to be @inventhub's first investors. He came through our Fall 2018 batch. He is making the hardware design process, for hobbyists and professionals, easier than ever. Can't wait to see the community grow. #FridayMotivation

“Plan9 was a test lab for us; we had office space, stipend and networking opportunities that allowed us to experiment with our startup DIY Geeks. I would like to thank Zainab Tariq and Hammad for mentoring and grooming me a lot in terms of pushing me out of my comfort zone.” Usama Abid

InventHub is going to launch really soon and it's going to be a place where users can think, innovate, design, code and program their hardware online before ordering it. Technology is a global phenomenon and it is not bound to any race, religion or country. Anyone who ever had an innovative idea, suffice it to say that the sky is the limit.