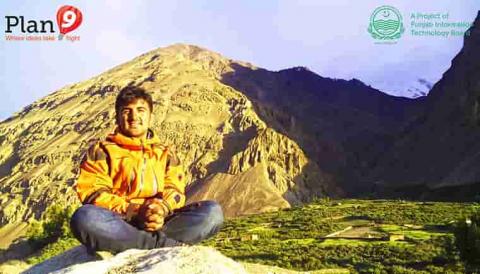 The part of the country I belong from, did not have access to the world until 2004. We had to walk for three days from Shimshal Valley – Hunza to reach the Karakorum Highway. With everything so out of reach, I could have ended up anywhere but thankfully, I was fortunate enough, to get good education though community schools.

When I turned 8, I left my village and moved to Karachi, later Lahore, in search of better education. Once we moved to the city, my elder brother raised me and in due time I got a job, supporting my own education. From a young age, I was fascinated with technology and used to fix computers for my neighbors using Software CDs.

We would go home once a year and sometimes even once in two years, depending on whether we could afford it or not. Though I wanted to travel back and forth frequently, it just wasn’t possible.

” I had a job which helped me pay my bills but it also restricted me, I wanted the freedom to travel as often as possible and to make this work, I began freelancing.”

My focus was on technology so I started developing websites for customers.

Working as a freelancer didn’t work well for me, so instead, I used the money saved for my semester fee, to set up a call center called Toor Mobiles. The biggest hurdle which I came across was to convince my family when it came to starting my own thing. At that time, only my bother stood by me and supported my decision.

My first serious venture was, Shoqa.pk, a marketplace for handicrafts. The experience wasn’t good and within 7 months our team fell apart forcing us to shut down the whole startup. By then I had decided that entrepreneurship was the answer to all my dreams, so to gain insight and knowledge of the entrepreneurial culture, I joined Pine.pk as a web developer and later became a co-founder. Soon I realized that gardening was not my thing, I had no interest in it, so I quit.

I believe that things have a way of working out. While in Hunza, I went for trekking with my nephew and on the way, my shoes broke. It began to rain and got unbearably cold, death seemed certain at that point. Luckily, we survived that and it was then, after spending a dreadful night in the mountains that I came up with the idea of establishing Shimshal Adventure Shop. I discussed this idea with my family and we decided to setup an e-commerce store, providing high quality adventure equipment, in Pakistan. Having on-board, people with tech experience and knowledge of the tourism industry, we have been doing quite well.

“I would advise everyone to never procrastinate in life, sometimes a simple disease can become a major illness, if not treated immediately.”

If you have a problem, try to solve it at the earliest stage possible.– Muhammad Saeed Spicher, Co-Founder at Shimshal Adventure Shop.