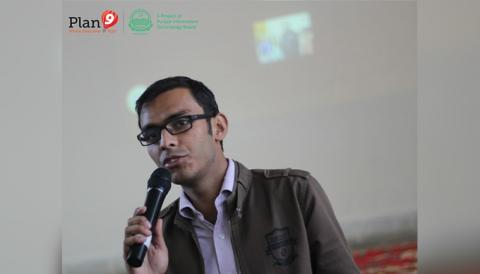 “I was a very pampered boy till the 12th grade. My first experience with the outside world was when I went to NUST hostel. As I graduated, I realized that in-fact the world protected by the bounds of my university was still not the outside world in its true sense. My father asked me to live on my own, without any financial support. That was a blow in the face. It was my first experience with the outside world and boy was it like train hitting you at bullet speed. Desperately I started looking for a job but didn’t find any for a long time. Under extremely uncertain living and food conditions, I started AnaarTech, my first startup. I already had some experience in running an organization as earlier on I ran – Irtiqa during university. AnaarTech made good money, but it was a chaos. It however gave me enough mental room, away from the worries of a ceiling above my head and food in my stomach. I realized what I am doing was not adding to the society in a meaningful way. I always wanted to add value to the society. After two years of AnaarTech, since June 2016, it was Sahara iO that helped me achieve this dream. Similar were the thoughts of Abdul Saboor – Founder, CEO Sahara iO. The final nail in the coffin was a story that touched us on a personal level but that story is for another day.

For now, let me tell you about the struggles I faced. The most I have felt troubled is in managing people. It’s really hard to make a plan in your head and execute it with people who are not you. Every individual has different ideas, they try to do your work with ways they think are most efficient and it eventually turns out that too many cooks spoil the broth. However, it’s only through resilience that I was able to overcome all such problems.

It is through these interactions with different people that I have understood one thing in life; never think you can get the most out of the people with shrewdness, the most effective way is to let them know that they are important and they will put their heart in your work.”