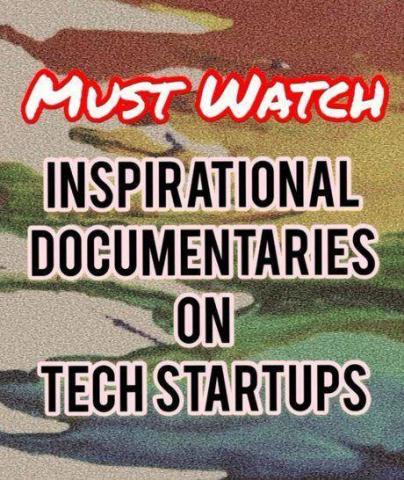 If you are interested in knowning about the entrepreneurial spirit and want to get fimilar with startup ecosystem, you’ll want to watch some of the following tech documentaries, which offer in-depth looks into the lives of founders and their ups and downs encountered during their entrepreneurial journey. When it comes to entrepreneurship on the big screen, we’ve all seen the Social Network and HBO’s Silicon Valley. However you may not have heard of these lesser-known documentaries, which just might help you to turn your vision into the next big thing.

1. Startup kid
The Startup Kids is a documentary about the young tech entrepreneurs in America and Europe. You will be getting an insight about the dynamics of startup life from the experiences of startup’s founders of Vimeo, Dropbox, Soundcloud and others. You will also be getting a basic understanding about the startup environment around tech ecosystem. Many influential personalities of tech industry are also mentioned in it, for instance, Tim Draper and MG Siegler, tech blogger at Techcrunch.

3. Generation Startup
Directed by Academy Award Winner Cynthia Wade and award-winning filmmaker Cheryl Miller Houser, Generation Startup follows six recent college graduates building their startups as they explore their potential, take opportunities, fail and start again in a city that was at the verge of crumbling, Detroit. You can see how the struggles and triumphs of six graduates who put everything on the line to build startups. It is about the risk-taking, an entrepreneurial spirit, and the revival of Detroit.

4. Startupland
Named the #1 Documentary for Entrepreneurs by Inc., Startupland is a documentary series that follows five CEOs taking their companies from idea stage to seed funding through an accelerator program. It also features interviews with co-founders of AOL, Reddit, LivingSocial, MapQuest, 500 Startups and many more. It empowers, educates, and inspires entrepreneurs globally. You will get familiar with how to build ideas into promising companies before presenting to a room full of investors.

5. Code Girl
The documentary follows high school girls from around the world as competitors of the Technovation Challenge, aimed at designing, building and pitching a smartphone app that serves a social purpose. Overcoming stereotypes is the defining element in this documentary, as girls try to find their place in a male-dominated world. It addresses the gender imbalance in tech and encourages more young women to pursue tech-related degrees.

6. Elon Musk: The Real Life Iron Man
“Bloomberg Risk Takers” series gives us a glimpse of Elon Musk, the man behind PayPal, SolarCity, Tesla, SpaceX, and Neuralink, as one of the technological leaders of the 21st century. It is going to inspire you to have big dreams and the determination to make them come true can take you even to Mars.