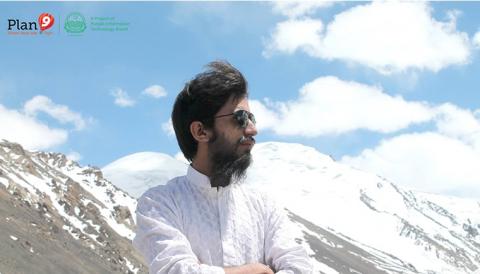 I belong to a lower middle class family with a limited educational background. However, my father was determined to make sure that his children had access to quality education and prioritized this over many things. It was only due to his determination and continuous effort that I ended up in the best engineering university of Pakistan, National University of Sciences and Technology (NUST). It was …an honor for me and my father that I became the first engineer of the family.
From the very start, I was fascinated by robotics and artificial intelligence. I gathered a team to work on our final year project, one year in advance. Slightly humorously, I wanted to make an iron man at first, but Dr. Yasar Ayaz (Technical Advisor at Sahara io) gave my passion a reasonable direction and made me realize the necessity of making wearable robots for otherwise incapacitated people, calling it a better approach. He insisted that by taking a modular approach and going limb by limb I could actually achieve my original idea after all. I worked on wearable robots for two years and made an intelligent wearable robot for people with paralyzed ankle as my final year project. Professional development and grooming at NUST transformed my vision completely. From someone whose primary objective was to secure a job, my goal changed; I wanted to become an entrepreneur.
I developed a sense of responsibility that being an engineer I have to do something for my country and my nation; I have to build something new and to build and introduce my own idea, I have to take the initiative. I knew that after my studies finished, I would have to support my family and I wouldn’t be able instantly start my own venture. That is why I started my own tuition academy; AIMS Academy, which later turned into AIMS group of academies with three campuses and a school, allowing me reasonable financial sustainability and freedom to work on my own project.
Before graduation I received a job offer from Lucky Cement Limited (LCL) and my father helped convince me to take the offer so that I may have first-hand experience of corporate culture and industrial SOPs. After several refusals to my proposed redesign or modifications to the existing process and machines, I realized that it’s not my place. So I tirelessly kept on working on my product. Fortunately In February 2016 I secured a position at Bestway Cement which enabled me to get to my hometown Islamabad where I could work more conveniently on my product and gather a competent team.
It was during my stay at Bestway cement, when I contacted Kunwer Faran and told him that we’re ready to take our project to commercialization stage, and asked him if he could join me as a co-founder. Kunwer Faran, who worked with me on the same project, has always had the determination to take this project to market. I was also able to convince M. Usman Yousaf (CTO Sahara iO) and we started working on our idea together. Accumulating my passion of robotics with my will to work for the betterment of community we ended up starting Sahara iO in 2016.
The biggest struggle I faced in starting a hardware venture was resource acquisition. Gathering a competent team and finding enough funds to run the R&D were the big hurdles. We bootstrapped every penny that we could gather and collectively the whole team spent Rs. 550,000 from our savings. It was the confidence in our product that enabled us to achieve this much. Since, we were a small team we had to work day and night to cater to the workload, but we didn’t give up and kept working; we kept on motivating each other and survived through hardships as a team and a family.
Another challenge I faced was resource management. Due to limited resources at every stage I always had to prioritize what specific resources are allocated to each task.
The one problem I faced in my personal life starting my own venture was to convince my father. He worked his whole life in government sector. For him the dream was to see me as a gazetted officer working for the government. I promised him that in the years to come he would tell his friends and extended family how proud he was of my achievements and that, for him was the biggest reward always. So after hours of discussions and arguments he finally agreed and allowed me to pursue my dream. I would also like to mention here, that my father was never a hurdle for me, starting my own venture rather he always had my back. He just kept on trying to convince me to do what he thought is best for me. He is my biggest strength, through all my hardships he has always supported me by all possible means.
My entire life I have learnt, where there’s a will, there’s a way. Your determination to one clear goal is the only thing that keeps you going. If you’re determined and focused you will always find a way no matter how far you’re from your goal. On more thing, if you run towards money you’ll get tired and will end up achieving nothing. Rather if you’re working on solving a problem with a will to serve others, you will survive the hardships. The bigger the problem, the bigger the impact that you’re creating and the more you will be motivated and determined.”
– Abdul Saboor – Founder, CEO Sahara io