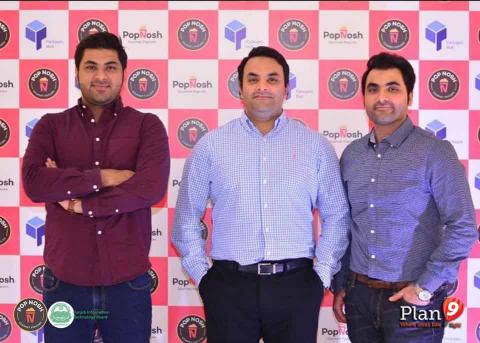 “PopNosh is a family affair; run by me and my brothers. The first question people usually ask me is where the name PopNosh came from. Pop is from popcorn and Nosh means snacking in between meals and also is an urdu word نوش.
I have always had an equal knack for food and software. So after I completed my Master's from Washington, I decided to pursue my passion for food. Gourmet popcorns were a rave back in the US whereas in Pakistan, the concept of gourmet popcorns was an alien one to say the least. In my search for which direction to take, my wife lead me to a Popcorn store. It was only a fun trip for us but the idea of a gourmet popcorn store got stuck in my head. I called my younger brother to the States to join me on a traineeship where we learned the art of making gourmet popcorn. Soon after returning to Pakistan, I relayed the idea to my father. Although skeptical at first, he decided to invest in the venture along with us. It is a fact that every business venture is a risk and one has to be brave enough to believe in their idea to succeed.
I believe that knowing the secret recipe of a product makes you an expert player and that’s why we can introduce any new flavor in the market whenever we want. Although we know of about 70 flavors, we believe in localizing the brand. At the same time, we don’t believe in increasing the price of the product as it cuts down on customer base, but the currency depreciation that we are currently facing is causing us to lose customers as well as profit. However, the key is to persevere. Regardless, our overall experience has been phenomenal. We have expanded our operations into Lahore, Islamabad and Faisalabad and have a total of 8 branches so far.
We are planning to venture into retail market and have experimented with it in some areas of Lahore. The dream is to establish Pop Nosh as the outstanding snack retail supplier of Pakistan to reach other cities.” Faizan Zubair CEO Pop Nosh